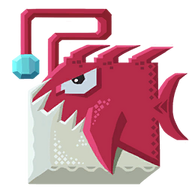 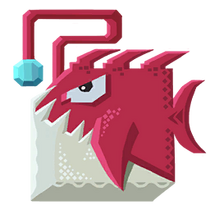 Anglers feature a bioluminescent lantern on their heads, and a giant, ferocious mouth.

The Angler is one of the creatures in PixARK.

This marine creature uses its light to lure smaller fish closer, then swallows them in one gulp.

When you explore the deep ocean, a tamed Angler will be a good partner for you because its light can show you the way, it is also a good get away dino if you get into trouble with a bigger dino

Some smarter Anglers have evolved the ability to emit the energy stored inside their light gland as static electricity, allowing them to paralyze their prey for a short period of time.

They are found in the ocean and will attack players on sight. In fact, they can even group themselves to feast on carcasses dropped by creatures as well as protecting their own kind. Starters should be wary of this terrifying fish if they want to venture themselves into this deep sea.

This section shows how to fight against the Angler.

Anglers live in the deep ocean and players must consider about the environment they're living with. Large predators like Megalodon, Hippocampus and the Manta would likely attack them at any time and they should evacuate fast. Otherwise, players would be finished if they are not armed themselves with Scuba Armor or better.

Generally, an Angler can often swim around you in circles and attack but it would be more threatening if there are other Anglers' attention are attracted. In that case, use your mount that has sufficient health and damage to compete the Angler's schooling as well as their agility. It is also possible to kill it without a mount, one way is use ranged melee weapons such as a Copper Spear or better, yet swords are not recommended due to its lower damage and a higher chance of breaking. A regular Crossbow would also work as it is the only ranged weapon fired underwater.

Use a crossbow for ranged, and a spear or sword for melee. A powerful mount like a Sarco, Megalodon, Manta and Hippocampus can also deal with schools of anglers.

Be careful and retreat when you notice too many anglers swimming around you if you don't have a mount. Also keep an eye out for other dangerous creatures.

When compared to other marine creatures, the Angler is not as strong as them which is alongside the Megapiranha.

Provides a light in the deep oceans