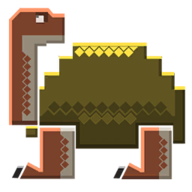 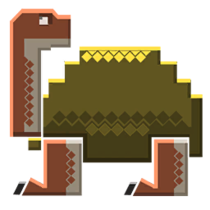 Carbonemys had a large body and live during the late Paleocene period.

The Carbonemys is one of the creatures in Pixark.

The Carbonemys is a slow, peaceful animal. Perhaps the secret to its long lifespan is its passivity.

The firm shell on a Carbonemys' back can decrease most taken damage. People often tame them to make use of this ability.

Carbonemys is a large prehistoric tortoise that is slightly shorter than a player. It possesses a firm yellowish-green shell on its back which is armed with spikes. The feet are stubby and the head is slightly bigger with a pair of supraorbital ridges.

Carbonemys is neutral and will not attack you on sight unless you provoke it or take one of its eggs. Fortunately, it does not deal much damage and its slow movement gives player an advantage for meat and chitin source which takes time due to its large amount of health.

Very defensive which absorbs damage from small creatures. Yet, still useless because it has no capability at attacking

It can be used as a mount by equipping it with a Carbonemys Saddle found as an Engram at level 30.