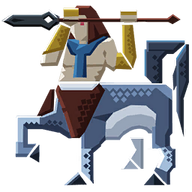 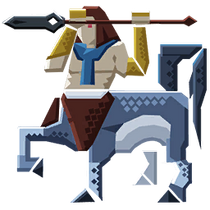 Centaurs are half human and half horse. They are fierce and rude.

The Centaur is one of the creatures in Pixark.

Forest Centaurs are the masters of the ambush. Their sudden attack and ghost-like speed make them a nightmare for adventurers.

Centaurs are trained to become mounts. The speed and endurance of a trained Centaur is far beyond that of a normal horse. Their spear throwing skill also makes them good partners in combat.

Among the centaur species, some spent their lifetime living in the Magic Forest which is surrounded with magical elements, evolving their perceptibility to magic. These centaur forgo the spear, and instead use a staff to summon air magic, and the powerful tornado (RMB) to range-attack the enemy. 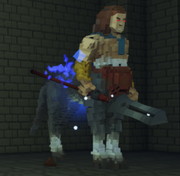