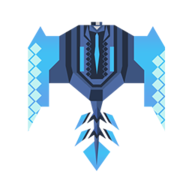 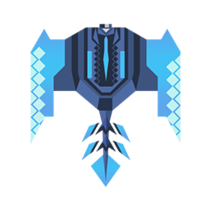 The Cobaltstar Giant Wing is one of the creatures in Pixark.

Gigant wing needs lots of cobalt batteries even if tamed.

It will try to stay on its biome but it is possible it will follow you.

For passive tames, there is a long wait between the first and second feedings as the creature eats, after which it follows the feeding intervals listed. These feeding intervals are estimates - the actual interval will vary per-creature based on random chance.
Error: No taming-data for "Cobaltstar Giant Wing" found. If the current page is not a creature-page, write the wanted creature as first parameter. Use only the common name, found on the creature's dossier.

To knock out this creature you will need to use cobalt tranquilizer dart. Single dart cause 900 torpor. Torpor of gigant wing is from 20 000 to 45 000 or more. That means you are going to use about 30 to 60 or more darts. It is recomended to tame it as team but you can also use platform saddle but it is more recomended to use Gargoyle because you can stand on it when you unmount. Just remember to set it on follow and passive. Also be aware because gigant wing is not as slow as it is looks and it is able to shoot hight damage lasers. When you knock out this creature you will need cobalt battery as food. It is only food that you can use and it is also food for it when you tame it. Warning: Cobaltstar Gigant wing needs lots of batteries.