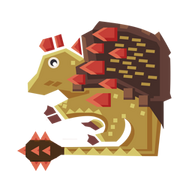 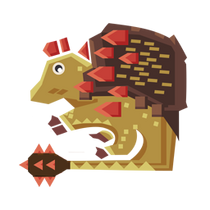 The Doedicurus is one of the creatures in Pixark.

Doedicurus is a common creature. Its round body is protected by a firm shell. Upon encountering danger, it will roll up and become immune to nearby all melee damage

A tamed Doedicurus is a good friend to have while collecting basic materials, as it can break soft soil and materials such as flint.

Found ONLY in the Mountain Forest biome, the Doedicurus subspecies can easily be recognized its distinctive color and shape its tail has. The mountain forest subspecies has adapated their destructive slow rolling skill into one that is quicker and more maneuverable, better suited for the complicated terrain this biome presents. Additionally the subspecies is unable to mine but the roll allows you to free spin around for a few moments.