The Minitrain is an item in Pixark used for the transportation of goods and structures, and to a lesser degree, survivors and creatures. They use Coal for fuel.

Minitrains are vehicles that can transport items. They are very much a 'Work in Progress' and needs a fuel source to function with three slots for fuel.

There are 3 types of Minitrain, two called Minitrain and one called Train Building Platform. The first looks like a Minecraft minecart for hauling items. The second is a low, flat platform with side rails, similar to a furniture-moving 'Dolly'. This seems intended to be a transport for the players, but knocks players off at an incline (up or down). The third offers a large, approximately 7x7 platform on which structures may be placed, similar to a dino platform saddle. Players and dinos may not sit in the cart but may stand on the 'Dolly' and platform types. All carts have an inventory that carries up to 5,000 lbs. but only 20 slots for items. (as of 07-27-18)

Once placed, minitrains cannot be picked up and must be destroyed. Tracks cannot be placed under a minitrain. 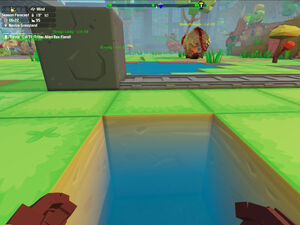 Illustration of end of track abutting a block. 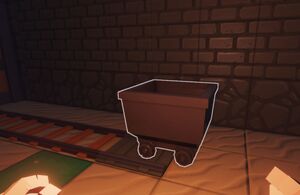 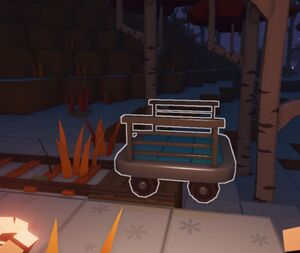 Minitrains are powered by coal and travel slightly faster than survivor walking pace. Coal may be placed in the fuel slots but not in the inventory slots.

A minitrain will run off the end of a track regardless of if there is a block to prevent it doing so. Once the minitrain has gone off the end of the track, it cannot be restarted and must be destroyed. Similarly, if a minitrain stops mid-journey for any reason (running out of fuel, being turned off, etc.) and is not at a Train Station, it will give the option to "Advance" or "Return" based on which direction it was heading at the time it stopped.

As minitrains do not have seats, it can be challenging to ride them. When starting, the minitrain will often leave without the player. It is possible to jump onto a moving minitrain from the rear if the jump is timed correctly. Players are almost always knocked off if the minitrain turns a corner or starts on an incline. Laying prone on the minitrain can help but is still unreliable.