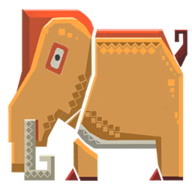 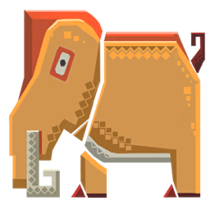 The Phiomia is one of the creatures in Pixark.

Phiomias have a voracious, insatiable appetite. They seem to eat food all day long.

Phiomia have become popular among adventurers because they aid in farming once tamed.

Will remain passive against the player unless attacked.

Phiomias will remain passive unless attacked by the player. Once attacked they will continue fighting back until the player breaks line of sight for long enough.

Attacks by charging player with its tusk.

Unlike most creatures, the Phiomia drops 2 feces per drop, making it a valuable source for fertilizer. 2 Phiomia can be loaded up into a Phiomia Hut to produce fertilizer passively as well.

Feeding Stimberries to a Phiomia seem to encourage feces production at a rapid rate.