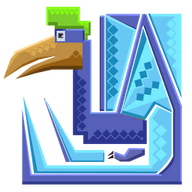 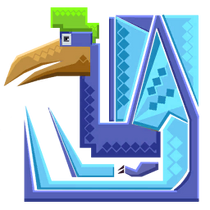 The Quetzal is one of the creatures in Pixark.

The Quetzal is a docile aerial beast, the true lord of PixARK skies. Unless sleeping, they never touch the ground. With its powerful wings, they can glide in the sky effortlessly.

You may consider a tamed Quetzal as your home in the sky. It can easily fly through the air while supporting the platform saddle.

Some Quetzal are intelligent enough to learn to fly along with the airflow, which allows them to sprint forward for some distance (Press C). Compared to its normal counterparts, Quetzal subspecies is better in movement speed and attack despite its inferiority in other stats.

The Quetzal is a large flying dinosaur, similar to an oversized Peteradon. It is usually seen flying slowly not very far above ground level in snowy areas.

Sleepy Darts fired from a

Longneck Rifle, but aim for the body and not the head. As the taming time is not that quick, maybe bring along a pixblock'd attack animal to help protect the taming area.

One survivor pilots any flying mount able to pick up the second survivor, and the grabbed survivor shoots the Quetzal.

Gargoyle or other flying mount that is large enough to stand on after dismounting in mid-air. Chase the Quetzal, dismount, shoot until out of range, remount. Rinse, repeat.

Emperor Scorpion and set it to Aggressive. Pick it up with a tamed

Argentavis. Keep the Scorpion in the Quetzal's face. Note: This is painfully slow.

Method 2 - Hanging in there

Make a grappling hook and fit it to a crossbow. Fly a

Pteranodon (or any other flying mount) near the Quetzal, dismount and grapple your mount as you fall. Switch to your rifle and shoot the Quetzal. As the Quetzal moves out of range, use . (Attack this target) to follow it, and as you approach it again, Y (All stop follow) to avoid your mount damaging the Quetzal.

Tips: Press the attack and all stop keys several times to ensure they register. Carry parachutes in case of keying errors.

Travel: Due to its low stamina usage and high weight it is a great animal to carry your resources through the whole map.

The Quetzal is capable of picking up some creatures by right clicking on your mouse (LT on Xbox), making it ideal for capturing creatures and bringing them to a safer location for taming.

List of creatures that has been confirmed that the Quetzal can pick up and carry along.

Can not be converted into a PixBlock.