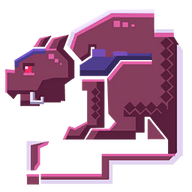 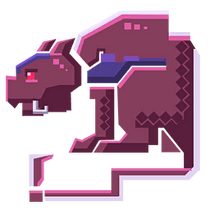 The Shadow Leopard is one of the creatures in Pixark.

Wild Shadow Leopards are ferocious killers. They like to attack their prey at night. They are fast, so once caught, it's hard to escape.

The Shadow Leopard is an amazing creature whose ability will be enhanced after being tamed. They can help riders to hide from enemies which makes them great for staging ambushes.

The Shadow Leopard subspecies can activate its inner magic power while hunting prey to turn itself and its rider invisible (RMB) so it can sneak its way up to their prey for an ambush.

Eats meat. They will lose aggro and return to the Magic Forest when attacked outside of the biome. You can lure them into a capture pit/pen in a safer area for taming. Requires Magic Sleepy Arrows to knock out.

Its higher base stamina and it's ability to jump makes the Shadow Leopard a good choice for an agile scout.
It is able to harvest increased amounts of Fur, Leather, Bone, Chitin as well as Meat.
The player is unable to wield weapons while riding the Shadow Leopard.

When remaining motionless while mounted on a Shadow Leopard, the rider is invisible to other players. (But the leopard is still visible.)