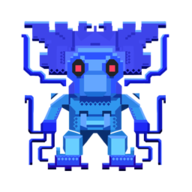 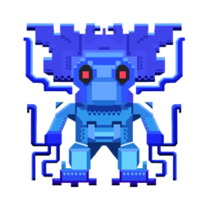 The Treant is one of the creatures in Pixark.

From afar, it appears to be a tree. It may even appear to be one up close. Don't get too close, however. These powerful treants will punish anyone that disturbs them.

A trained Treant can be a good guardian. They are capable of hiding themselves by transforming into trees. There are rumors that they can even be trained as powerful turrets.

Over the course of interaction with other dinos and creatures, some Treants grow stronger arms, and evolve into a more intelligent creature, who is more more inclined to use its ranged attack. It is also noted that tamed Treant subspecies are more restrained; they are able to stay where they are as whistled, instead of indiscriminately charging its way forward like their normal counterparts.

While disguised, the Treant looks like a purple tree with a magic core in middle, floating just above the ground. If angered, it will transform into a humanoid wood creature.

Will rarely spawn a Baby Treant upon death.

You must stay in the Magic Forest while taming, otherwise it will run away from you or revert back to a tree.

They have very high health and very high torpor, so it takes a lot of arrows, but it shouldn't die.