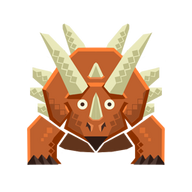 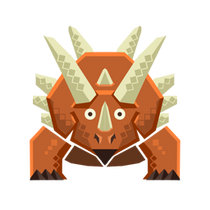 The Triceratops or Trike is one of the creatures in Pixark.

Triceratops is a docile herbivore, but you still need to be careful - those horns aren't just ornamental. They can be found roaming Novice Grasslands and Regular Grasslands.

The Triceratops is a favourite of dinosaur tamers, as it can help collect a large amount of wood and seeds.

Found ONLY in the Mountain Forest biome, the Trike subspecies can easily be recognized by its distinctive colour and head. To get better suited for the complicated terrain this biome presents, the Trike subspecies has developed a powerful defensive stance, using its head to fend off incoming attacks and counter attacks when the time is right. (Reduces all incoming frontal damage by 50% or more)

A medium-to-large sized quadruped herbivore with three horns on its head (one above each eye and one above its nose) and a frill lined with spikes behind its head.

Will remain passive until attacked by a player. When attacked, has very strong knockback and attack.

Can be passively tamed with berries upon reaching level 30.

Place berries or veggies in the last slot of your hotbar, walk up next to or behind the Trike of your choice and press "E" to begin taming.

Trikes are used to gather berries, berry seeds, and vegetable seeds from bushes. They can also harvest wood from trees and thatch from grass. Can harvest self planted crops like Wheat, Savoroot, Rockarrot, and Citronals (not working on xbox)