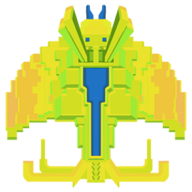 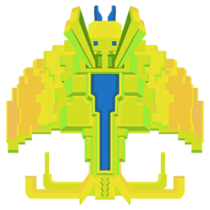 The Void Manta is one of the creatures in Pixark.

Void Manta are passive toward the player and dinos, attempts to engage will cause it to flee.

For passive tames, there is a long wait between the first and second feedings as the creature eats, after which it follows the feeding intervals listed. These feeding intervals are estimates - the actual interval will vary per-creature based on random chance.
Error: No taming-data for "Void Manta" found. If the current page is not a creature-page, write the wanted creature as first parameter. Use only the common name, found on the creature's dossier.

Void Mantas are passive and any attempt to engage in combat will cause it to flee.

Void Mantas can be saddled with a platform saddle making them an effective mobile base. They are not known for combat proficiency, so be sure to either mount weapons on them, or use them for non combat purposes.

Because of their passive behavior, it is advised to "cage" Void Mantas in a cube cage, completely blocking them from moving prior to attempting taming. They are often found stuck on the environment, allowing you to trap it. Firing sleepy arrows will cause it to flee if it is not encased in some sort of cube cage.